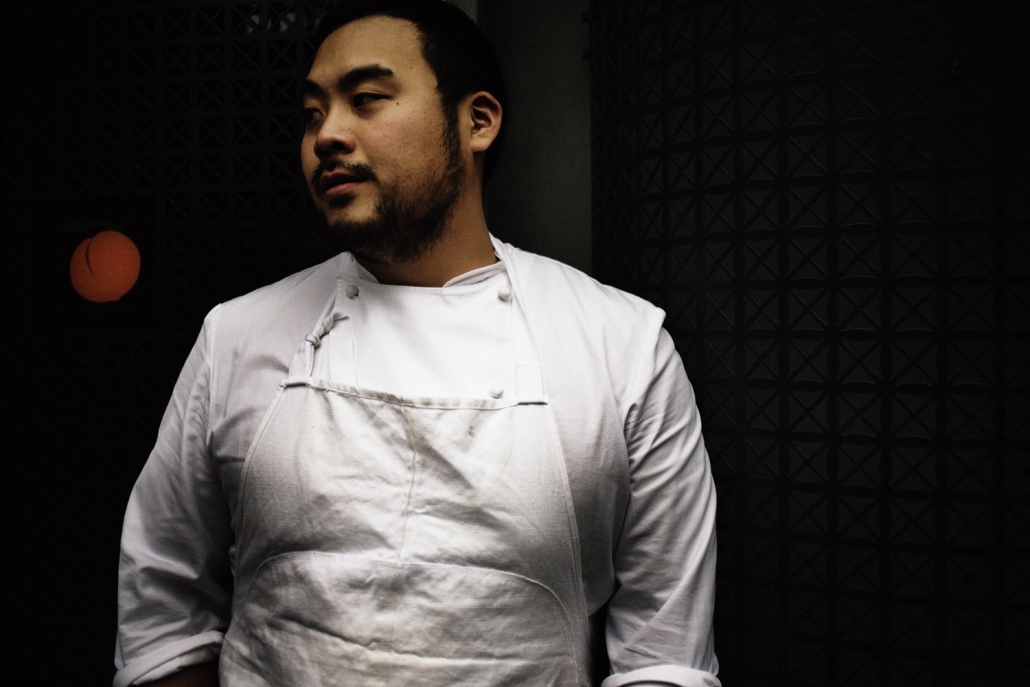 David Chang is the chef-owner of Momofuku. Before opening Noodle Bar in 2004, Chang worked in the kitchens of Jean-Georges Vongerichten, Daniel Boulud and Tom Colicchio. He has been honored with numerous awards from Food & Wine and Bon Appétit. Chang has been named to TIME 100 and GQ men of the year, and has taken home four James Beard Awards. Chang’s cookbook, Momofuku, came out in 2009. His quarterly print journal, Lucky Peach, was founded in 2011.

Why are you a chef?
I think I got into cooking because I didn’t know that I loved it. It was something my dad never wanted me to do. Getting to work with your hands and dive into a business that I didn’t know that much about was really interesting. It was a completely different thing being in your whites, in the kitchen, there is nothing easy about that. It’s a really multi-disciplinary field. You really get to be creative. It’s about a lot of repetition, owning your own space, and most importantly, teamwork. I liked it because I liked playing sports and there the same competitive edge to it all. But mainly I liked being a chef because at the time it was everything you weren’t supposed to be. There was a tinge of rebelliousness. Me and my friends that are chefs now, we were probably the last generation that got into cooking without knowing what was at the end. Cooking now is so cool and that’s great, but I don’t know if I would have gotten into cooking if it was what it is now. The allure of it all was that there was this band of misfits trying to do something. You had all of these individuals cooking very serious stuff, but take them outside of the kitchen and it was total buffoonery.  Put a bunch of these crazy people into a kitchen wanting to make delicious food and the discipline that happens was very cool. It’s almost immediate. What came after that was making people happy, working with farmers, and working with people like the whole Korin team. When I dug deeper, I found that what I love most about this business was the relationships and the people you work with.

Who inspires you?
I try not to keep in touch with everything that is going on in the world. Before, what inspired me was other chefs and places like Japan. I was so inspired by Japan that I wanted to move there. I wanted to work there, and I did work there. Now the world is a lot smaller and everyone shares the same inspiration, because of social media. While that is fantastic to keep tabs on, I like to get my inspirations from places that are very strange and unpopular.

When I came in I told the chef here, Rudy, that we should put a french dip sandwich on the menu. Not very cool, but was more about what I want to do and less about things that are in vogue. My inspirations currently are things people aren’t really doing, not because we don’t want to but there are so many people collectively mining that. It’s really hard to do something that wasn’t done before.

What is your favorite food memory?
I really don’t have one, because they happen all the time. I recently opened up a restaurant in Washington DC and was able to put a couple dishes from a Chinese restaurant that I grew up eating on the menu. That menu was a collection of many good memories I had as a kid. The restaurant growing up wasn’t the kind of place that everyone likes, and there were a few dishes that were not watered down for the American population. It was Shandong style cuisine, and as I grew up I learned a lot about it. I probably grew up eating at this place more than anywhere else. The reality is that the restaurant closed: like many first generation families that open restaurants, their kids didn’t want anything to do with it. It was around for many years and the second generation took care of it, but the third generation didn’t want it. If I had the time, I would have just taken that restaurant over.  I was really missing those dishes, like the braised boneless chicken and braised tofu dish. Eventually I wanted to just put the dishes on the menu and that is what we’re doing right now. That is a more recent food memory that is a culmination of a lot of other memories. It makes me happy because the food doesn’t look beautiful. I mean it’s brown… It’s in brown sauce and it just doesn’t look appealing to most people, but I’m at a point now where I don’t really care. I just want to pay homage to the great dishes in my life.

What has been your greatest mistake and learning experience?
My biggest mistake was right here in this restaurant. We opened up the Ssam bar as a Korean burrito bar in 2006 and that failed miserably. People often tell us “Oh you’re so successful,” but it’s not that. We have failed. All the time! Oftentimes flat on our faces. But I think there is a resiliency here and a commitment to making things work, even the most dire situations. In 2006, the concept was great, but I think we were just eight years ahead of the times by serving things in an assembly line style. I see a lot of similarities between Korean food and Mexican American food on this level. It was a crazy idea and it failed. Through that failure, I learned that failure can be liberating. Failure can show you that you can still be afraid, and that the fear is actually real. The only thing worse than that fear is closure. Failure can set you free from the fear of the worst case scenario, because the worst case scenario is at your doorstep. Then you can start doing whatever you want to do and that is what kind of happened here. That turned out to be our biggest failure and biggest success.

Ten years ago, there literally was nothing on the internet about anything remotely Asian. There was no google translate. Now I can surf the web forever learning about what people are eating in Tokyo right at this moment. That could have never had happened! Back then you had to go to Kinokuniya to get the magazines and by the time you got them they were six months to a year old. But to me that was amazing: the sheer fact that if I wanted to know what was cooking in Japan, I had to go to the Japanese book store, buy old books and magazines and then try to figure out what was going on. Now I can go on to some site that is the “best of Tokyo” or the “Best of ramen shop”, or the “best of the secret eating clubs” that are no longer that secret anymore. I can know exactly what has been done, the price of the fish that they purchased, and the kind of knife that the chef is using. These were the type of things that would take years to learn! If I was a young cook, I would learn the commitment first. Learn that there is a whole other way of doing things. I think a lot of young cooks don’t know how to sharpen their knives, and that is embarrassing. It is really shockingly embarrassing. Their tools aren’t ready. Start with your tools! You don’t need fancy expensive knives, all you need is a sharp knife and to maintain that edge. Have the proper equipment like spoons, chopsticks, and a variety of sharpening stones. Even a plumber has more than a plunger. They take care of those tools. Too many young cooks don’t have any care for their tools.

If you go to top kitchens in say Japan, they work like doctors in an operating room. Everything is all folded out, they know exactly what is going on, and there is a sense of purpose. I look at cooks today, they just think that it will all just take care of itself. There is a lack of seriousness that needs to change. This is a business that will most likely spit you out, even if you go to culinary school, over 95% of the time. There is a 95% failure rate in this business under 5 years. What are you going to do as a young cook to not be a statistic? You have to work hard and go work in the best kitchens and environments. You shouldn’t be a sous chef in a year, and you should be in places that are going to push you to learn. Be disciplined, be a student of what you’re doing, be respectful of what came before you, and just work.

What is the difference between a chef and cook?
I think the French say it best. You can be a chef and be the head of your own station. A cook is a laborer and the chef is the head of those laborers, who manages and organizes everyone together for some unified goal.

What can cuisine teach us about the world?
I think cuisine teaches us that people want to eat well, regardless of cost. If it’s good enough, it transcends culture.

Which cuisine or technique are you currently excited about?

Strangely enough I never thought I would want to make Korean food, but we are making a lot more Korean food these days. That is the food that I want to eat more and more of right now. But that will probably change in six months, and the next thing might be Peruvian food or something. Peru and Burma are two places that I am curious about now.

What is the most important aspect of cooking and what do you think is the most important skill in the kitchen?
Organization. In the kitchen you’re cooking all day long, but the reality is that you’re organizing and cleaning. 90% is organizing and cleaning, and only 10% of it is actual cooking. I tell a lot of cooks that if you can be the cleanest and the most organized, then you’ll learn to be a good cook. But being organized is really hard! It’s funny, a good cook is always the most organized cook in the kitchen but their personal lives and apartment are usually a total mess.

The most important skill you can learn as a cook is empathy. Empathy is thinking about what the other person is feeling. If you make a dish in a vacuum where you are the only one that thinks it’s delicious, then you’re making a dish that will most likely not be loved by anyone else. You have to think outside yourself to imagine how someone else might taste something. What would someone else want? You are just one part of the equation to make that happen. Young cooks that are thoughtful and considerate of other people’s feelings tend to be the best sort of cooks. If you taste a dish, keep in mind that it’s not for you. You have to think “how would someone else taste this?” How to empathize is  a very important skillset that often gets lost.

Also a good spoon. It’s the balance. All of my spoons are either stolen or given away, and seeing that all of the young cooks are using cheap spoons makes me mad.