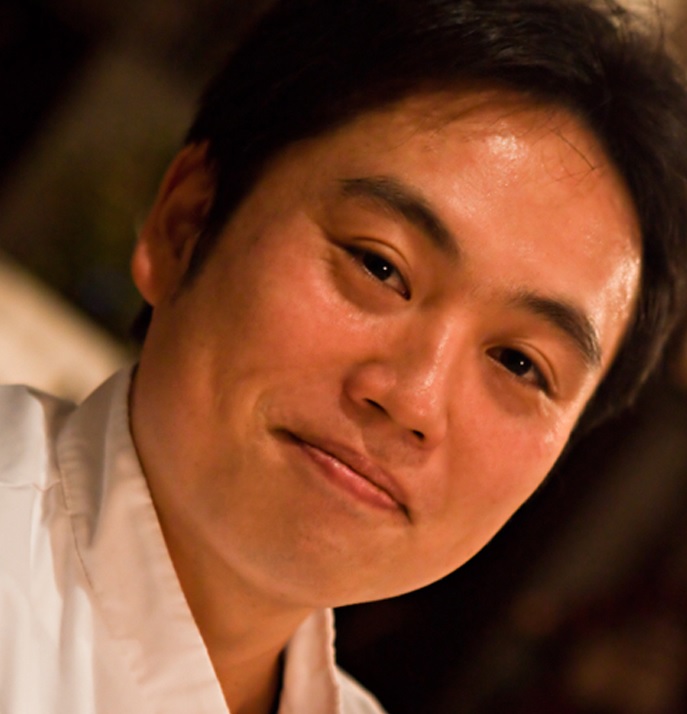 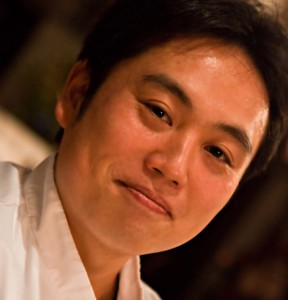 Isao Yamada’s decision to pursue culinary arts was inspired by his encounter with the philosophy of kaiseki cuisine. He attended Tsuji Cooking Academy in Osaka, then returned to his hometown of Fukuoka to open his own restaurant, Kaiseki Hanaei, at the age of twenty five. He soon met Chef David Bouley, who encouraged him to join his Japanese restaurant project. This collaboration has won much acclaim, and through his work at Bouley Evolution, Upstairs at Bouley, and Brushtroke, Yamada has succeeded in bringing his acute sensitivity for Japan’s seasonal food culture to New York.

What have you learned on your travels abroad?
I went to Spain last year, so of course the environment I was raised in was completely different than Europe. There was a restaurant up in the mountains that charcoal grilled all of their dishes. I ate these red Spanish shrimps that were grilled until they were very crunchy on the outside, but the inside was warm and not completely cooked. When I had it I thought, “This is amazing, it’s like Japanese dishes where the concentration in on the ingredients and it’s not touched beyond what needs to be done.” I realized that no matter where you are in the world, countries with high quality ingredients will concentrate on the natural flavors.

What do you like about Japanese knives?
I’ve been using Japanese knives for about 16 years, but I still find myself impressed and surprised by the sharpness of their blades. The entry cut and cross section of the cut is incomparable to any other knife. When you find a really good knife, you can’t help but be a little smittened. I think everybody finds themselves admiring their favorite knives even when they’re not being used.

What was your first knife?
My first knife was an usuba knife that I purchased in Sakai city. I admit I squeezed pennies to buy it since my pay wasn’t very high, but I found the knife I liked and purchased it. I only used it for three years, because I was a beginner and I was not sharpening it properly. It definitely did not last very long in comparison to what I have now. Sometimes I wonder what it would be like to use my first knife again, maybe it would last longer.

How do you shop for knives?
Knives are not something I shop for often, so when I do I am very serious about it. I go to many different stores and look for something I really like.

What is your goal for your career?
I don’t currently have a long term goal, because everyday is such a challenge. My mentality and things I do have changed so much over the years and Brushstoke is finally in its third year. I only have the short term goal of simply make each customer happy.

What is your advice for aspiring chefs?
Continue what you started. This goes for being in a restaurant or studying the culinary arts, if you start just keep going. I think there is something to gain no matter what happens in the long run. If you fail, then at least you know what you need to do next time.

Thank you for stopping by Chef Aleksandr Bogachek
Scroll to top