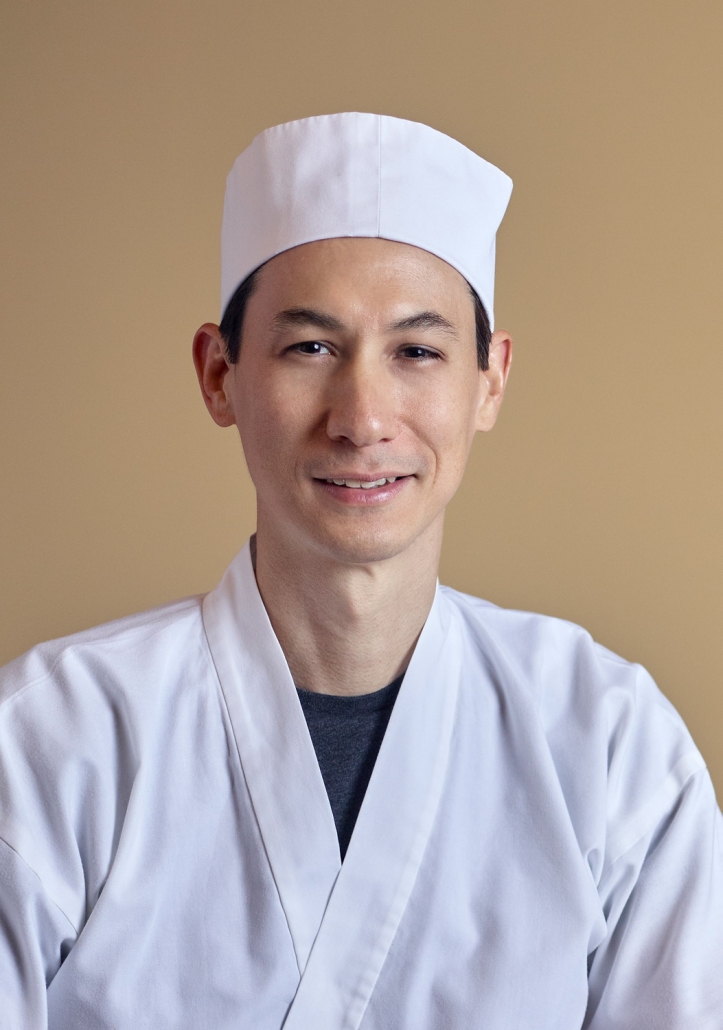 A gifted chef and strong businessman, Kevin Cory first began making sushi at the age of 19 under the supervision of Executive Chef Nobuo Kase in Miami. From this early apprenticeship Cory learned the mentality of a true chef, valuing precision, creativity, and a deep knowledge of the craft. After Chef Kase left Miami, Cory continued to practice and study, eventually traveling to Japan in 1999 to learn from his uncle Chef Yasushi Naoe. Cory perfected many technical skills, but most importantly he learned to put his full heart into his passion, and it’s this trait that earned him many accolades upon returning to the United States. In 2005, he was ready to open his own restaurant, but was concerned that his family name, Naoe, might be too difficult for Americans to pronounce. However, on a trip to Japan he discovered that his relatives were brewing smooth, high-quality sake and shoyu, and Cory knew he had to use the name to honor his uncle and the other great craftsmen of his family. NAOE was born and has been receiving rave reviews ever since for its decadently fresh and uniquely designed bento boxes and sushi platings. In 2013, NAOE was awarded the Forbes Travel Guide Five-Star Award, and Cory traveled to Japan to gift a plaque to the wife of his late uncle Yasushi Naoe, letting her know that his uncle’s legacy lives on in him. The original one-chef NAOE continues to garner success after success in Miami along with its sister establishment N Shabu Shabu.

What made you decide to enter the culinary industry? How did you start cooking?
After graduating high school in Miami, my friend and I visited my sister, who was attending UCF while working part-time at the original 350-seat RanGetsu on International Drive. We met with the executive chef, Kase-san from Kyoto, to learn how to hit a golf ball and eat pizza. While I was eating pizza, I noticed him staring at me, and I awkwardly turned away a little and kept eating. He sternly said, “Kevin, you have very good hands to make sushi.”  My friend and I burst out laughing, but Kase-san was serious. He said, “Move to Orlando and I’ll teach you everything.” I was flattered, but I didn’t want to be a chef. Who wants to peel potatoes all day? I didn’t say that though. Getting into the culinary arts had never crossed my mind and I didn’t want to leave Miami.

Coincidentally, a year later Kase-san moved to Miami to open a restaurant in the Fontainebleau Hilton and offered to teach me again. I was working valet parking and sleeping through community college, so the opportunity to learn Japanese cuisine from Kase-san felt very exciting.

Kase-san was very focused on fundamentals, technique, and ideas. He started me in the sushi bar to learn prep, how to properly make rice, pick up specialized techniques, and even count the grains of rice in nigiri. He was guiding me to be a true chef, not just teaching tasks for a kitchen job, and I loved it. However, shortly afterward, he left and there was nobody to learn from. That brief introduction to cooking with Kase-san was more of an orientation than a full culinary education.

I had no teacher, no experience, and no deep knowledge. I was at the very bottom with many other beginner chefs who were constantly trying to outdo each other. However, my experience wrestling and playing the piano combined with a desire to earn respect made this creative and competitive self-teaching “sport” involving long hours of fast hand movements and finger coordination very compelling. I believed being a chef of Japanese cuisine was something I was well poised for, so I threw my entire self into it.

I found working in a sushi bar demanded more than technique though, because guests like to ask many questions and as the only person who spoke fluent English everyone would ask me first. It felt like being on stage just to have tomatoes thrown at me. That pressure fueled a fire for knowledge, but it was frustrating to find most everyone had different perspectives. I had to efficiently decipher the reasoning between variations to figure out what really mattered. This environment bred an obsessive practice and hunt for knowledge. That’s when I “decided” to be a chef.

I built a small library at home, which actually started with the first Korin catalogs with chef interviews. Japanese knives are exciting, especially for young chefs. Not only did I have Korin catalogs to drool over, I was also inspired by the featured chefs, who seemed like famous athletes. Seeing chefs featured by Korin and knowing that my uncle, Yasushi Naoe, was a kaiseki chef in Japan was hugely inspiring. After several years of self-teaching, in 1999 I was fortunate enough to finally rub elbows with my first and only real teacher, my uncle Yasushi Naoe in Toyama, Japan, for a new beginning.

What inspires you to create new dishes?
I try to emphasize the heart, balance, and progression of a variety of courses for an overall experience, rather than focusing on a single dish. Sometimes dishes are new and innovative, and sometimes the aim is to elevate the fundamentals, which then makes an old dish become new, even if it’s just subtle, as long as it fits into the overall experience. Whether the mood is rustic or refined, inspiration often occurs when ingredients strike a different chord, changing perspective and impacting technique. Sushi is a great example. I have a saying: “Same fish, same rice, different hands, different sushi.”

What is your favorite food memory? Do you have a favorite dish?
My most vivid food memories are often revelations from great ingredients, strong cooking techniques, balance between dishes, and timing of service. For example, when I was working with my chef uncle Yasushi Naoe in Toyama, Japan, we had partially ended a kaiseki dinner with sushi. In the kitchen, my uncle had sporadically made one nigirizushi with beef. Right after he formed the nigirizushi, he immediately lifted it towards me to eat it.  As I raised my hand to accept it, he raised his hand to block mine, putting it into my mouth with precise touch and timing. The impact of the aforementioned combined with his heart is unforgettable.

I don’t have a favorite dish though. It depends on my mood. But I really enjoy the clean sensation of life in fresh ingredients.

What do you like about Japanese knives? Do you have a favorite?
I love the one-sided Japanese blade, its carefully balanced weight, and the comfortable wooden handles.  Every sharp clean stroke with my yanagi feels so soothing. Slicing through hambones with my hamokiri always amazes me. The weight and balance of a carefully-crafted specialty knife feels like magic. The strength and subtleties of Japanese craftsmanship are truly incredible. The knives passed down from my late chef uncle, Yasushi Naoe, are my favorites for sentimental reasons. I can’t pick one over another.  They all keep me connected and inspired.

What do you think about the growing popularity of Japanese cuisine? Do you find yourself using Japanese ingredients in your dishes?
I think there is a pursuit of purity that’s also increasing the popularity of eating local and organic foods. This actually builds palettes more suited for high-quality Japanese cuisine, which is lightly seasoned to enhance natural flavors. But high quality shoyu, sake, su, konbu, and katsuobushi are rarely made outside of Japan. I love to serve my relatives’ Nakamura Shuzou sakes and Naogen marudaizu shoyu from Kanazawa, Japan to enhance and compliment my cooking. Only ten breweries are granted an organic certification in Japan (JONA). Akira is the world’s first sake granted organic certification in the three major regions, Japan (JONA), Europe (ECOCERT), and the United States (USDA).

What is your goal for your profession?
As a professional, my goal is to build a good business that deserves respect. The obstacles a restaurant must overcome are constant. As far as accolades go, the ultimate for me is the revered Forbes Travel Guide Five-Star Award. It is the only objective and rigorous international achievement that has enough confidence in its anonymous inspections to be transparent and open for discussion. I’ve been incredibly fortunate to have always operated with manager Wendy Maharlika who has the same drive to consistently prove oneself while building a positive culture. Achieving the goal of great teamwork is an important and ongoing task.

What advice do you have for aspiring chefs and restaurateurs? What is the difference between a chef and cook?
Many young aspiring chefs don’t fully understand that the restaurant is a business, not an art school. A culinary artist who ignores the business should aim to cook at home instead. A chefs’ major requirement is an efficient and relentless work ethic, along with building on the team’s fundamentals and owning all mistakes. Aim to eliminate excuses. Do whatever it takes and more to exceed expectations, even if tasks seem unrelated. My business card reads,“Executive Chef, General Manager, & Dishwasher.”

Gain perspective off the cutting board as well. Approach and enter the restaurant as a guest to better understand expectations and the importance of hospitality. Studying cooking without studying hospitality and your guests’ honest body language may be disadvantageous. A chef must observe guests dining.  Notice the different ways food impacts various guests, whether subtle, soothing, exciting, boring, or even frustrating.

This may sound odd, but one must learn how to lose fast to excel fast by learning what really matters. Be humble. There’s a saying that the guest is always right, but there’s also a saying that the guest is never right. In my experience, having worked in an open kitchen sushi bar an arm’s length from the faces of thousands of guests, everyone is an expert at what they like to eat, but it doesn’t make them an expert on food in general. Even a child knows if peanut butter and jelly or chocolate is “best.” However, all guests’ opinions and criticisms should be respected, even those of children. Most guests are not considered a mastershokunin or purely objective without bias. So, when a guest inquires, “What’s best?” I may say, “What’s best is what’s best for you.” Our hospitality at NAOE involves guiding our guests for the best overall experience for each and every individual.

Sourcing products is also a big part of being a chef. Whenever possible use the freshest organic products to be considerate to the environment and the good health of your guests. I often drive to local fishing boats and even 80 minutes south for good local produce. The food served should reflect more about nature than the chef, despite requiring good techniques and the heart to bring it all to the forefront.  Simple is “best,” but simple is actually quite difficult.