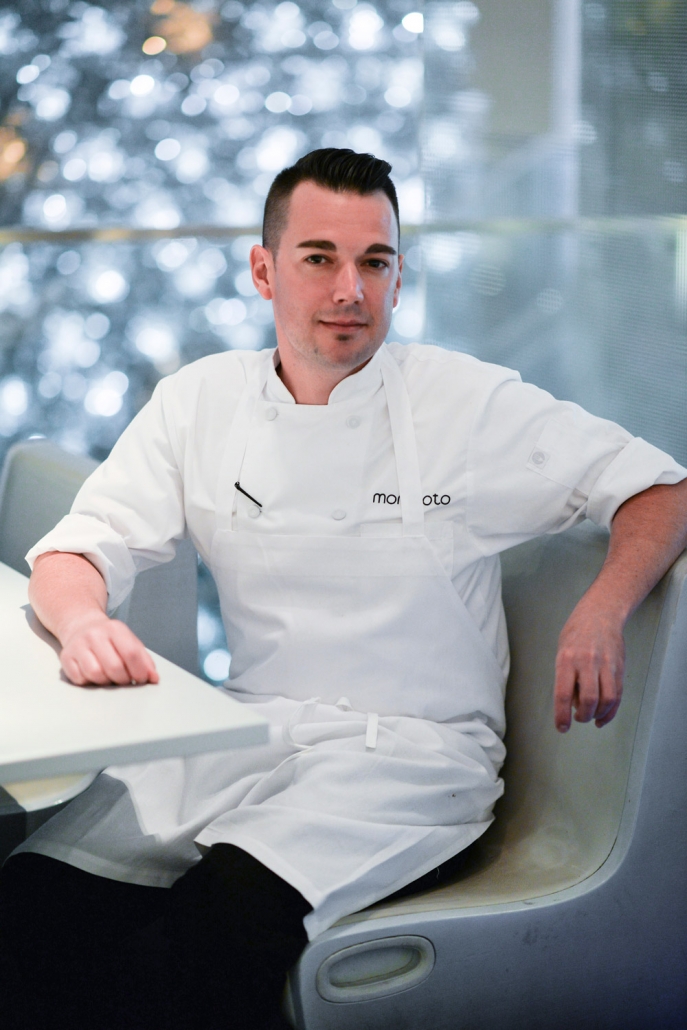 Robby Cook first developed a curiosity about Asian ingredients during university. He opted to drop out of college, moving to Santa Monica, CA, where he attended sushi school, followed the Institute of Culinary Education in NYC. His first cooking job was with Josh DeChellis at Sumile, and his first sushi job was at Angura with Osamu Inno. It was at Morimoto that he met his strongest mentor, Makoto Okuwa, who pushed him to become head sushi chef after he left. Cook credits Makoto with giving him his understanding of the finer points of both food and guests’ needs. Sharp knives, the skills to use them effectively, and simple, high-quality ingredients are his most valued tools.

In conversation with Robby Cook on how he became a chef  and how he become the sushi chef at Morimoto NYC.

I was working in the produce section of a grocery store throughout high school, so I was always around food. I decided to go to business school and I started cooking more on my own. I started to work in an organic co-op similar to Whole Foods and I was meeting farmers. Iron Chef was getting more popular, so I decided to quit going to college and get into cooking and sushi. I went to the California Sushi Academy in 2003 then moved to New York to go to the Institute of Culinary Education right after. My first job as a culinary professional was at Sumile with Chef Josh DeChellis.

Of course being with Chef Morimoto inspires me because he is always making new dishes. But just going out to eat and seeing what is going on in New York. Music as well and seeing people be creative in other fields drives me to be creative in my own field.

Right before I started working for Morimoto Restaurant, I sat at the omakase bar with Chef Morimoto and he cooked for me and my wife. This was when he was working every night at the restaurant. I was working at BondSt in 2005, right before Morimoto Restaurant opened, and Chef Morimoto came to eat on a Sunday night with a couple chefs from Japan and the opening chef of Morimoto New York. He saw me working then called me over and asked “do you know who I am?” Of course I knew who he was and I actually put in an application before, but there are so many people applying. He told me come by next Friday and I went in then worked. It started getting busy so I just began making sushi and he saw me. One week later, I left BondSt and over ten years later I’m still here. People always say why don’t you leave this job and why do you stay here, but I was looking to find the right sushi bar and this place is amazing. Such a big sushi bar to take control of and the amount of fish we get in is great!

Have a sharp knife first. Not everyone is going to teach you how to sharpen your knives, so it is up to you to learn your style and your technique. Other than that, work hard and be polite!