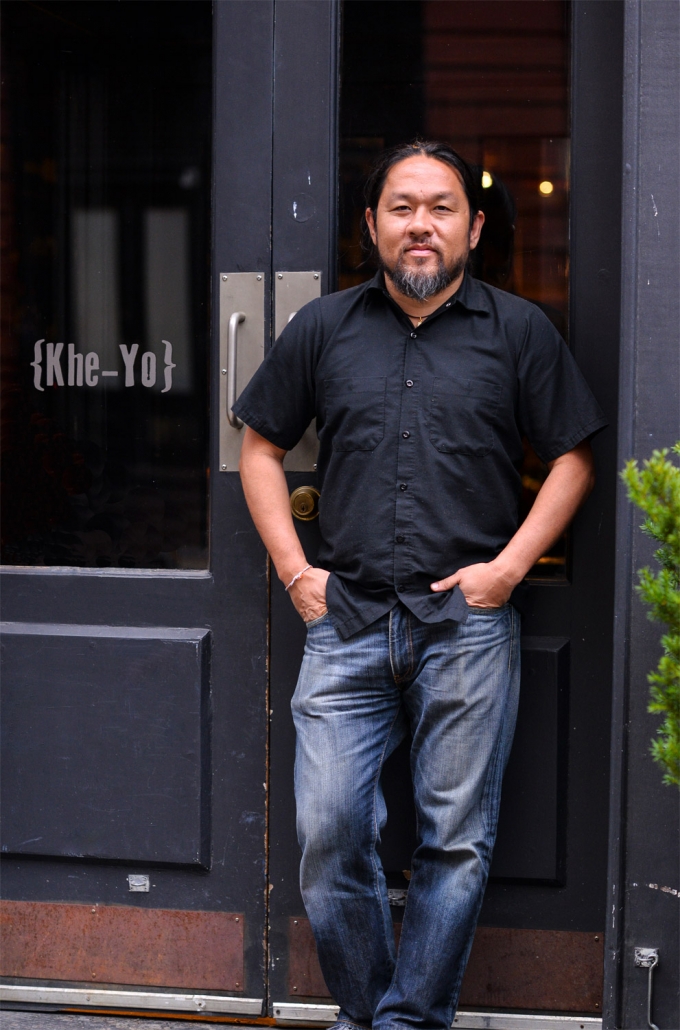 Chef Schwader currently owns and operates Khe-yo in NYC with Mark Forgione. Born in Laos, he immigrated to Wichita, KS as a refugee with his mother and siblings at a very young age. Dissatisfied in college, he found himself working as a cook in a restaurant, and given his talent and passion for food decided to attend the New Orlean Culinary Institute in VT. After completing his program, he moved to NYC and began working, but noticed the complete absence of Laotian cuisine, which led to his decision to open his own restaurant. There is a strong sense of tradition and family in his cooking, and his mother will often stop in to supervise and criticize. His 2011 trip back to Laos was highly informative, and helped to set the menu for his NYC establishment. Khe-yo highlights traditional Laotian flavors using quality local ingredients, encouraging guests to engage directly with their food by using their hands to eat.

Why are you a chef?
I fell into it, because to be honest I wasn’t really good at school and college. I was cooking at the time, and all of the chefs that I was working with said, “You should really take this seriously, because you’re kind of decent at what you’re doing.” I was about 20 years old, and I looked around at all of the line cooks. They were all about 30 years old, all alcoholics… As I begin imagining working at this place for over ten years, I knew I didn’t want to end up like them. My chef told me that I should really think about culinary school, so I looked into it then I ended up going to New Orlean Culinary Institute in Vermont. Afterwards I decided to see New York and somehow get experience. Before, it was all about trying to figure out what I wanted to do. When I came to New York and started cooking, I realized it was much more than that. You have to be passionate about what you do. The City definitely instills that passion, drive and competition in you. I’ve been pretty lucky.

What kind of restaurant were you working in when you started?
I was working in a brewery, so it was a good starter point for me cooking wise in my career. I learned how to cook a burger medium rare, the temperatures for properly cooking steak, and how to cook on a larger scale. New York definitely refined all of my experiences, and allowed me to concentrate on what I wanted to do with my career.

Do you still keep in contact with those chefs?
I don’t, but I still go back to Lawrence, Kansas and see memories of college. They are still putting out the same good food that I remember. That holds true for any successful restaurant. You always still think about certain dishes that either I made while I was there or stuff that I remember being really good. I still crave the food that I first cooked.

Who inspires you?
So many different people inspire me. My partner here Marc Forgione, my family, my mom, people who have made an impact in my life, but it’s more about being able to think of a dish that I grew up with, or me and Marc have cooked, and then to expand on that idea. Those are the things that really inspire me the most.

Obviously my mom is a big inspiration, because I still don’t think of myself as an immigrant. I wasn’t born here, but I came here when I was really young. Trying to keep traditions alive is really important, which is something that I didn’t realize until now when I’m almost forty. In the beginning of my career it was all about just learning, cooking and gaining knowledge. Now it’s about keeping tradition alive, which is to keep the flavors that I grew up eating that might get lost if I didn’t cook the foods that I grew up eating. That has been my inspiration.

Korin’s staff comes to eat here alot, and I heard rumors that your mom comes in to check your food?
When my mom visits, she sits in the restaurant and actually sits in the kitchen during service and just watches the whole production and chaos of everything. She will always put in her two cents, of course, as a mom. I always have to remind her, “Mom, it’s my kitchen.”

How did you and Chef Marc Forgione decide to start working together?
We worked together before opening Khe-yo. We opened up BLTs together. Actually, the first restaurant that I worked at when I moved to New York was AZ with Patricia Yeo. She opened a second restaurant, Pazo, where the original BLT steak is, and Marc came aboard so we worked together. He was a line cook and I was the sous chef. Then, he went then did a stage in France for a year and then came to work with Chef Laurent Tourondel. He was actually opening up a new BLT Prime to become the Chef de Cuisine, so I became his Sous Chef. Our roles kind of reserved, but at the same time, when you make connections with certain people, they are life long connections. We inspire and feed off of each other. I am the first one to say if this dish sucks or I don’t like it, and he’s the same way with me. It’s that honesty to try to make each other better. We ended up living together for a couple years. We’ve always just had each other’s backs. At some point in my career, I felt that I didn’t want to work with anybody else and he was at a good point with his restaurant getting a Michelin star, so he asked me to open a restaurant with him. His notoriety and his little fame helped me to get this. I am very lucky and very appreciative of our friendship.

What is your favorite food memory?
I tell people that if you ever come to my house, the best food memory is to be able to sit on the floor and eat. It’s almost like the hibachi style with the hot griddle in the middle, and you’re just searing off your meats to make lettuce wraps. So if you come to my house and have this meal, it’s a two hour meal. Two hours of relaxing and making your little bites and perfect plates while sitting with friends and family. I tell people that I grew up in Kansas, and people are always surprised that I’m from Kansas. But if you come to Kansas, you’ll get a very authentic Laotian feast by coming to my mom’s house. Sometimes when I think about doing dishes, I think, “How can I recreate that feeling that you get growing up at my house?”

What has been your greatest mistake and learning experience?
My greatest mistake? I’ve made a lot of mistakes. Life isn’t perfect. Having a restaurant and working with fresh ingredients, nothing is perfect, but it’s just trying to recreate either a certain feeling or emotion when cooking without becoming too fussy about what you’re cooking too. Keeping it really simple. If you have a good product in front of you, then you shouldn’t have to do much except may be a certain technique or certain flavoring or seasoning. I’m still going to be making mistakes going forward too. I just tell my cooks that you learn from your mistakes and try not to repeat them.

What advice do you have for aspiring chefs and restaurateurs?
My advice is practice, repetition, and sticking to it, then pushing yourself. Every generation is different. Before I started cooking, it was probably harder to be a line cook, to get screamed at and to get stuff thrown at you. That mentality had changed a little, we have to be a little more civil and there’s not as much yelling. I think the successful cooks are the ones that are super driven, take criticism, adapt to a hard kitchen, and learn from making mistakes and paying attention to detail.

Do you think that the culinary world has changed?
There are always trends in the restaurant business, but they always come back. I think in the past few years, TV has painted an unrealistic view of the kitchen. You see all of these cooking shows. I have nothing against them, but it doesn’t really recreate the same things. You have to go in the kitchen, you have to pay your dues, you have to really put in your time, and you have to be really driven to be successful. I think people now when they get out of school, they think, “Oh hey, I’ll just be a chef.” I’m sure it’s a rude awakening when they walk into certain kitchens and they realize they have to really dedicate themselves. Good restaurants always have a good work ethic, and they re-enforce that when you go to their restaurants.

What is the difference between a chef and cook?
I wish I could just be a cook sometimes, because I love cooking, but being a chef is running a business. They teach it in culinary school a little bit, but it wasn’t until I ran a business that I could finally call myself a chef. Making a schedule, making sure that you have a profitable restaurant, because at the end of the day no matter how good your dish is, if you’re not successful business-wise it doesn’t matter. I think it’s the balance of managing people, being creative, and motivating. There are a lot of factors involved in calling yourself a chef. When people ask what I do, I tell them that I’m a dishwasher, because being a chef is just so much more than having a jacket. You just try to stay humble.

What can cuisine teach us about the world?
Different cuisine can show us different facets of people’s lives that you would never ever know, like when a chef recreates a dish from a memory in his childhood. Perfect example, I’m making a dish today. I was in Seattle with my cousin, she took me to this mom and pop operation Vietnamese restaurant call Rainier Barbecue. Their food was simply amazing. I had this one dish that was a water spinach salad with salted beef and onion with peanut sauce. When you eat this dish, it makes you feel like connected to someone’s family tradition, and it takes you a certain place in that family’s memory. You know that there is a Vietnamese mom back there yelling at people like, “Don’t mess this up.”

What is the most important aspect of cooking and what do you think is the most important skill in the kitchen?
A good skill to have is a good attitude. I don’t know if that is a skill, but have a really good attitude, pay attention to detail, and ask questions. When I see kids cooking now, they don’t ask enough questions. There is obviously a certain time and place to ask those questions, but before you’re setting up, as you’re setting up, and as you’re creating new dishes with the chef, ask your chef what the idea behind the dish is and get the full detail on how to do things. Write things down. I can’t remember 20 items. I need a piece of paper to stay organized, and that is the way you really become consistent. Having a restaurant and being a chef is really about consistency.