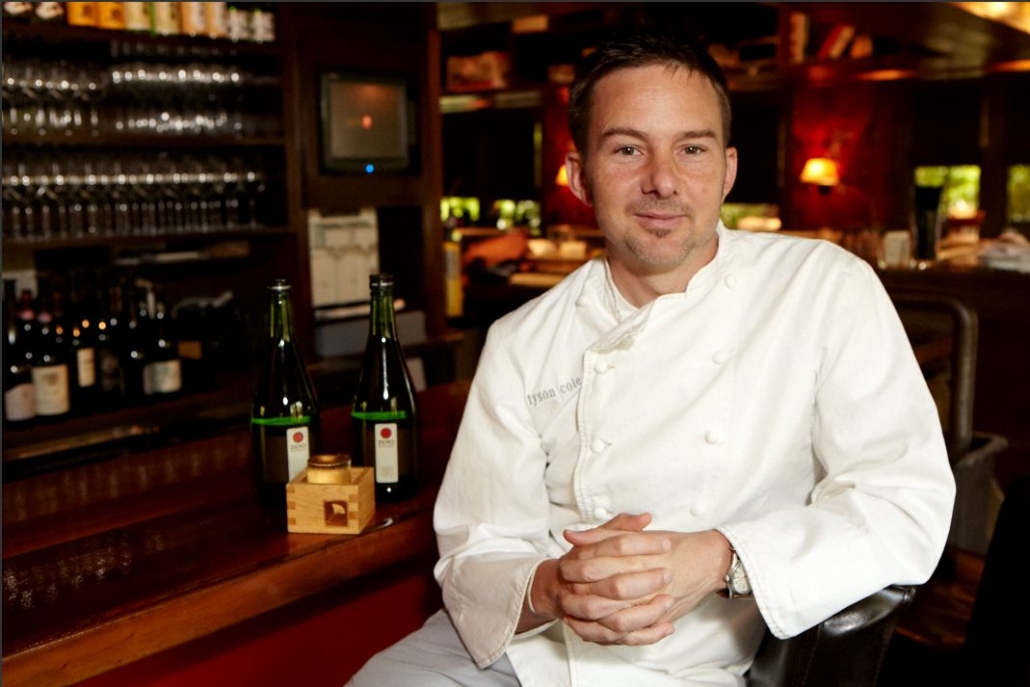 Chef Tyson Cole grew up in an average middle class American family in Sarasota, FL, eating what he calls “typical white people food,” meaning burgers, mac and cheese, and sandwiches. His life took an unexpected turn when, while studying physics and art at the University of Texas, Austin, he took a job as a dishwasher in a Japanese restaurant, and was given the opportunity to try his hand at making sushi. Cole enjoyed the creative aspects of this work and was a natural with a knife, leading him to apprentice for almost seven years under Takehiko Fuse of Musashino Sushi Dokoro, in addition to training at the sushi restaurant Bond Street in NYC. In 2003, he opened his first establishment, Uchi in Austin, TX, and today Cole owns four award- winning restaurants across Texas. Cole continues to put in time in the kitchen, where he enjoys playing with the intricacies of both flavors and plating, exercising his passions for food, creativity, and perfecting his craft.

What made you decide to be in the culinary industry and how did you start cooking?
I got a part-time job at a Japanese restaurant while I was in college.  I fell in love with the people and with the food and dove in from there. After that I decided that I wanted to become a chef, a sushi chef, and that’s how I started.

Who or what inspires you to create new dishes?
I think the biggest inspiration that I have in creating new dishes is probably from the guests. We try to make food at Uchi and Uchiko that people crave, but we also try to push the boundaries. We try to surprise people with things that they haven’t tried before. I get most of my inspiration from the idea that we are going to come to work and make incredible food, but what is important is that we make food that guests crave and we also add a few things to raise that bar too. The other inspiration is from family. I have three incredible daughters and an incredible wife and my family inspires me to go to work every day.

Is there anything new that you have been trying to get customers to try recently?
I think we have a whole foodie generation right now and it’s not as hard to get people to try new things anymore. It’s almost the opposite. Now guests are coming in and it’s challenging to us to make sure that we have the things that they want to try. We still try to bring in products that are very seasonal, but in terms of the adventure quotient–the level of people wanting to try new stuff–people are much more adventurous now. It’s incredible, I can’t imagine a better time to be a chef. When I started making sushi twenty-five years ago, not many people liked sushi. It was very exotic and it was very foreign and people were scared of it. For example, no one ate sea urchin, they thought it was very weird and disgusting but now people come and order it all night long. That’s pretty cool.

What is your favorite food memory?
I would say my favorite food memory was the first time that I went to Tokyo. I walked all over the city and spent the entire night going to three or four restaurants trying all different kinds of food. The sushi that we had there and the robota (translation) was amazing. I ended up at an izakaya with my sensei Takehiko Fuse (from Musashino in Austin) at about one or two in the morning, and we were eating all kinds of very exotic things. We had things that you wouldn’t be able to get anywhere else and the chefs were really surprised by what I was ordering. I think we had basashi (horse meat sashimi). That was crazy, you couldn’t get it anywhere in America. Overall the food and the commitment to excellence at all of the places that I ate in Toyko just blew me away.

What do you like about Japanese knives? Do you have a favorite knife?
Japanese knives are the best knives in the world. What the Japanese do with blades is unparalleled. When you think of a very traditionally trained sushi chef or shokunin, the years and years of training and sharpening knives are as important as the actual product and the fish. The knives are essential. So nothing really compares. Nothing gets sharper than Japanese knives. I think my favorite was a really nice fugubiki (blowfish slicer) that I bought in Tokyo. If you are used to using a sujihiki or yanagi-ba, the fugubiki is just so much thinner and lighter. I almost couldn’t put it down. It was like a light-saber.

What do you think about the ever growing popularity of Japanese cuisine?
I think that Japanese food in America has had momentum for a couple of years, but with the foodie craze it has really taken off. You can see it in the popularity of sushi specifically but also ramen and other types of Japanese food. I am so excited about it because it’s what I fell in love with. And every day at work it’s my job to make customers as addicted to Japanese food as I am. It is so awesome to watch happen in real time. It would be great if even more places would open. I hope there will be more Japanese restaurants in Austin where I live.

Do you have any found memories with your knives and what do they mean to you?
When we opened Uchi in 2003 I had a really nice Masamoto takobiki. It was the first one I had ever had. And I put a great edge on it, it took me about six months to get such a good edge on it. After I had opened for six months I had to fire my chef de cuisine, and when I fired him I actually gave the knife to him. Since then, that has been my tradition. Knives are a sign of life. As you grow as a chef, you are only as good as your people. So I have developed a habit of giving my knives to my chefs. Another really memorable knife was the first yo-deba that I ever bought. I was so beside myself about the versatility of it. It was a Nenox yo-deba Corian handle. And it was just an amazing knife for breaking down fish. I never knew that a small blade could be so versatile.

What is your favorite kitchen tool that is not a knife?
Probably two things: I like mandolins and I like food dehydrators.

What is your advice for aspiring chefs and restauranteurs?
The best advice that I can it is that you have to have an idea of exactly what you want to accomplish. People talk about having the talent, the location, the concept, and you need at least those three going in, but the most important thing is patience. It just takes time to really flesh out what the restaurant is going to become, what chefs are going to make it happen and what guests are going to love it. Don’t be too quick to change too many things. It just takes time. Patience is the most important thing in the restaurant business.

What is your philosophy towards hospitality?
We have five restaurants now and we just started a new company that oversees our restaurants and coincidentally it is called Hai Hospitality. Hospitality is what we are all about. Hospitality is the reason that I fell so in love with Japanese food and Japanese restaurants. It’s vital, not just for the guests but for the staff as well. If you are as hospitable as possible, it just leads to happiness: to new bonds and friendships between people. The value of it is incomparable. Hospitability is about going above and beyond expectations. And that is something that really surprises people. It’s something that people take away and tell their friends about.