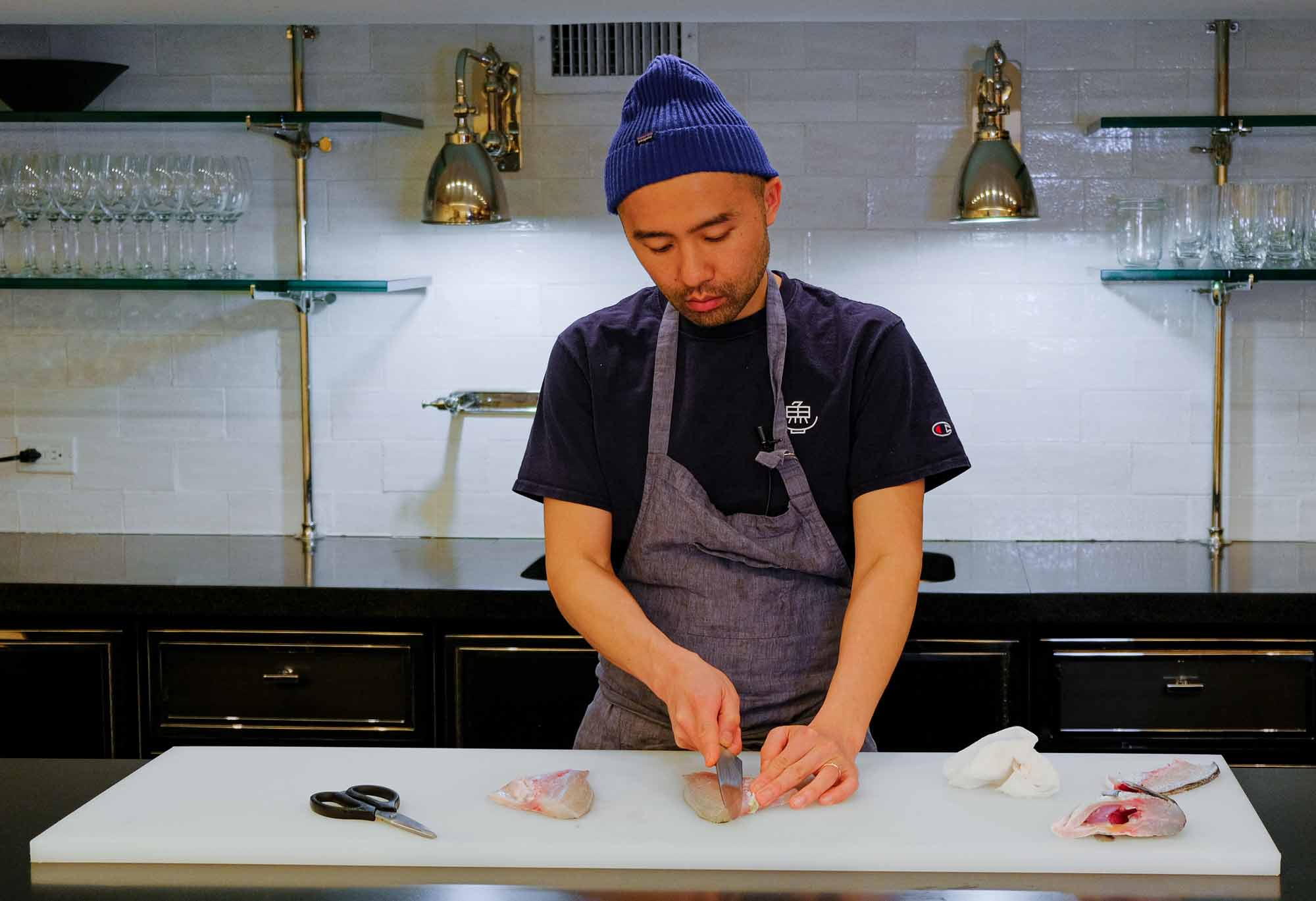 What Is Sanmai Oroshi & How-To’s With Chef Yuji Haraguchi

Sanmai oroshi, or three-piece cutting, is an essential technique for Japanese chefs.  It means breaking down the fish into two fillets and the center cut with the skeleton.  Sounds simple but it takes good skills to do it right; the goal is to preserve the flavor and texture of the pristine fish by minimizing damage during the process.

Chef Yuji Haraguchi, the owner of Okonomi/Yuji Ramen and Osakana in New York, teaches you how.

Yuji’s passion for seafood goes above and beyond.  His ambition and curiosity brought him to the U.S. in 2009 and he found a job at True World Foods, one of the largest wholesale distributors of fresh and frozen seafood in North America. During his career at the company, he gained a deep understanding of seafood and the restaurant industry.  Also, he found his mission to communicate the importance of sustainable seafood to the world through the traditional Japanese seafood diet.

At the core of his mission is the Japanese mottainai philosophy, which essentially means “it is too precious to throw out”.  Sanmai oroshi represents this mindset.  A well-sharpened knife and good skills can increase the value of each piece.  For example, instead of discarding it, the bony center part can be used for stock or making umami-rich crunchy snacks by frying them.  In the case of tuna, the meat scraped from the bones is called nakaochi and connoisseurs ask for it at sushi restaurants in Japan.

What Knife To Use For Sanmai Oroshi

Traditionally, the knife used for sanmai oroshi is deba but Chef Yuji developed his own way to break down fish while working in western kitchens in America.  He uses gyuto and scissors for this article instead.

Gyuto is the Japanese equivalent of the classic western chef’s knife and it is used to cut everything from meats to vegetables.  (Santoku is another versatile Japanese knife with the added superior function of vegetable cutting and is popular among home cooks).

Whereas deba’s hefty weight can make the cutting task easier, gyuto’s blade is thinner and more flexible than deba’s.  That is why Chef Yuji prefers using gyuto for sanmai oroshi.

“If the fish is over 10 pounds, you need a deba, since the bones are too big to cut with scissors,“ he says.

The chef also emphasizes that it is very important to understand the structure of fish to break down the fish smoothly.  Be sure to know where the bones are and align the knife with them accordingly.

During this process, make sure that the tail remains attached to the body to keep your hands safe.  Also, only use the tip of the blade (the first third of the edge).

Preparing a fillet for sashimi

Sakudori is the process of preparing a fillet into a saku block (a block of boneless, skinless and bloodline-less fish meat) ready for sashimi. For saku blocks, the fish meat must be of the right thickness on all sides.

If the saku block is thin, you can increase the surface area of sashimi by reducing the angle of the blade.  Start slicing from the heel of the blade and finish at the point of the blade in one pulling motion for a perfectly smooth texture.

We invite you to apply for Korin's Industry Membership.

APPLY NOW
How To Grill With Binchotan (Japanese Charcoal)